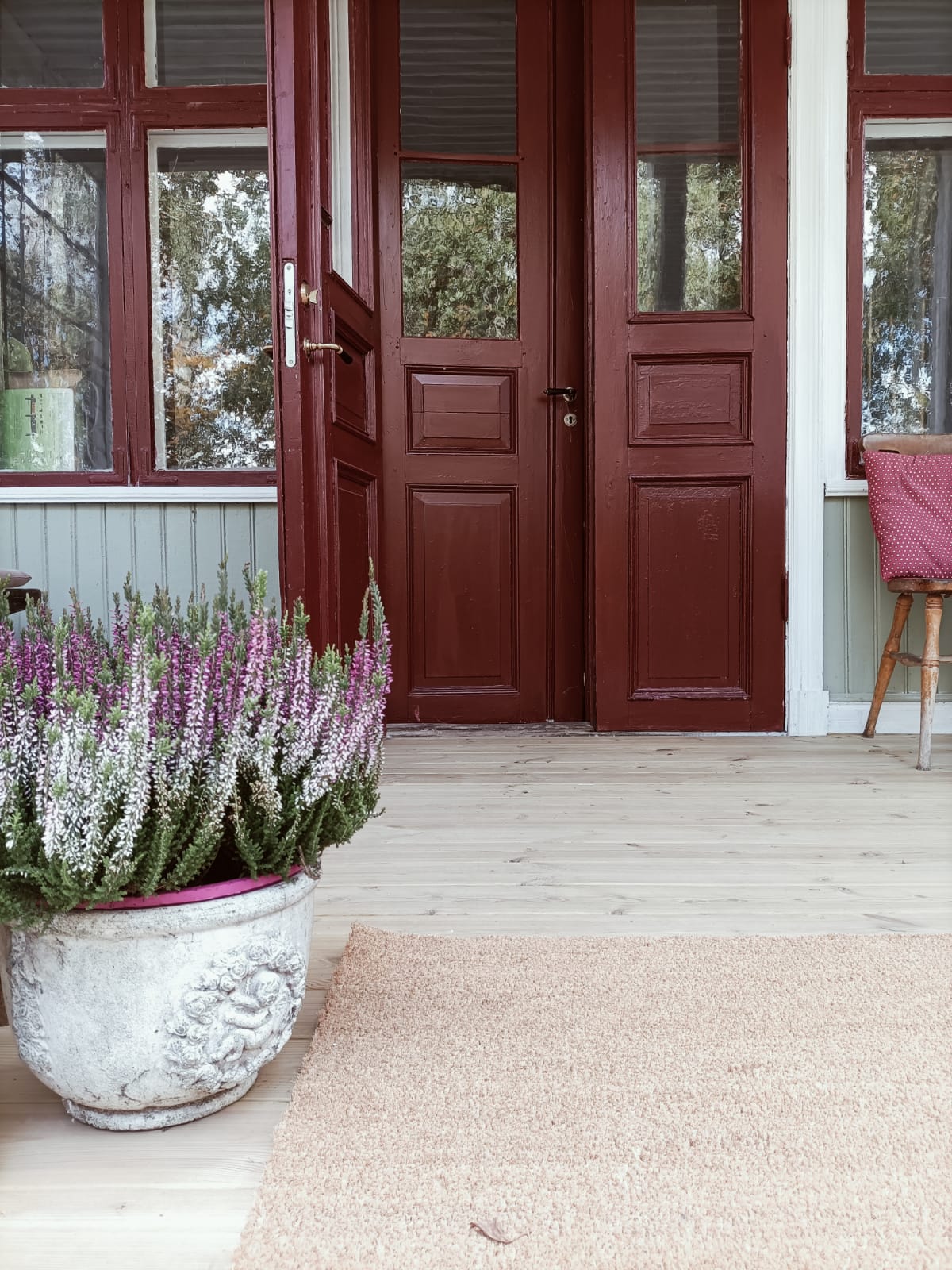 An update on the great living room renovation

Since august there has been apparent silence in our renovation project. But of course appearances are deceptive. The work in the large living room – or rather in the blue and red salon, has continued steadily. Sometimes with more or less verve.

Renovation of the blue and red salon

In the august update, I hinted that we would be sanding the floor. This took three full days with the big sander and then another three weekends with the hand sander.

We had borrowed the big sander from a construction store near us. We knew the staff and the machine, so it was totally nice to go there.

Unfortunately, we totally misjudged the amount of sandpaper we needed. We expected the dark wood oil to be easy to remove, as it was already chipping off in many places. But it turned out to be quite tedious. Exactly after half a day of sanding we ran out of paper. Another trip to the construction store was unavoidable.

After that we sanded for two days and managed to finish 1/3 of the room (the blue salon) completely. But the red salon unfortunately had a lot of places where the dark oil did not come off. Nevertheless, it was not worthwhile for us to keep the sander and so we returned it. The bill was quite high due to the high consumption of sandpaper, but to our surprise we received a generous discount. It really made our day 🙂

At the beginning of September, I flew to Germany to pick up our new addition to the family (a large Münsterländer puppy). While I was busy with puppy training, Felix was allowed to continue with the floor in the red salon.

And then everything went quickly

In October we set to work on the living room together. My motivation was very high, of course, because all the dust in the house was getting on my nerves.

And so I got in the car, drove to the DIY store, bought a new hand sander (with more oomph!) and on the same day we finished the living room together. This was followed by two rounds of dusting and finally I could start oiling on Sunday.

It is always amazing how you can achieve your goals faster and more efficiently as a team than alone.

Every day I oiled the floor. And yesterday I did the last part. Now the entire floor is oiled twice. Luckily Felix’s aunt brought us two tins of Osmos hard wax oil from Germany, so we didn’t have to buy the overpriced oil here in Sweden. Also we even have some left over for the hallway, which will be done at some point, and who knows, maybe for the shed?

What is on the renovation plan now?

Since the entire floor is oiled, we can now start building the bookcase. It’s a tinkering and carpentry task for now. We would like to start at the weekend so that we can get a first overview.

As soon as the bookcase is in place, the missing panels and the beam will be added. in the last step, the skirting boards and decorative strips will be attached.after that, our plumbers have to go into the house and the electrician. and then it’s just a matter of putting everything in place!

The large living room is the only renovation project we are pursuing this year. So it is running relatively relaxed.

Last month I ordered some lamps for the living room while I was in Germany. Wall lamps, a large floor lamp and a hanging lamp for the pool table. With Felix, we have also already picked out and ordered the curtains.

We also already have an idea of what furniture should go in the blue salon. These include a secretary, an old wooden cupboard, the brown couch (and the armchairs if there is any space) and possibly a wooden chest.

The red salon will be exciting, as we will need a lot of space for the pool table. So far, we are only planning to put the restored showcase in there, which will serve as a bar. I would also like to put our big wooden bench there, but it is questionable at the moment whether this will work with the space.

Away from the renovation, we have a new family member

As already mentioned, we have had a puppy with us since September. Last year we were already thinking about getting a second dog. The idea was also to choose a large breed that would serve as a deterrent in the worst case (a break-in).

But it was important to us to choose a breed that is not temperamental, can handle our Henry, is a good family dog and yet takes us a little out of our comfort zone. As we like longhaired and long-eared dogs very much, we flirted with the Münsterländer (the small ones) for a long time.

On closer inspection, however, the larger Münsterländer seemed far more appropriate. And so it came about that we decided in favour of the breed. We decided on this year as the time, as I only have to write my Bachelor’s thesis at the moment and have a lot of time to take care of the upbringing. And I know from Henry that a puppy needs an incredible amount of time in the first six months.

And so it happened that we spontaneously and by chance found a private breeder who just had a litter.
I spent the first month with Henriette in Germany with my mother. Because we had to wait until the rabies vaccination was valid before we could travel home.

There, our country bumpkin Henriette, who was born on a horse farm, was able to get to know the city. And now we are back home in the country!