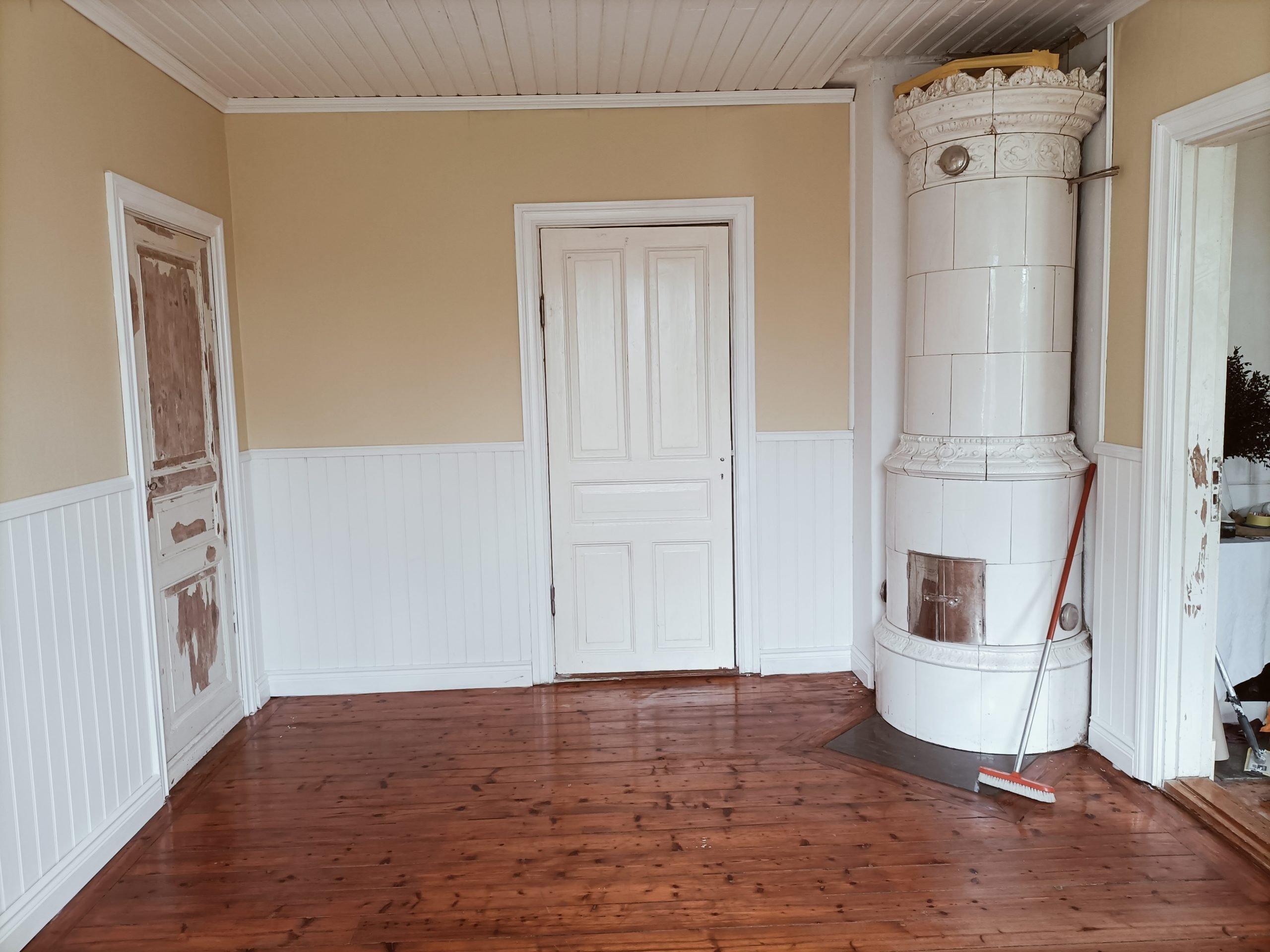 The yellow room – Renovation progress on the first floor

After much deliberation, we decided to focus the renovation on the main house this year. More specifically, the two bedrooms on the first floor. Both were in urgent need of upgrades regarding electricity and heating, and there were major problems with the stoves. An overview of our renovation journey for one of the two rooms, the former “cat room”, which has now been renamed the yellow room:

If we go back two years, to 2020, the room was in a decent condition. Ignoring the fact that the door was nailed to the wall and a half-full aquarium had been in the room for an unknown amount of time.

Anyway, our first act was to try and repair the door and of course dispose of the aquarium. The latter worked without any problems. The door, however, caused some difficulties. We discovered much too late that the door frame and the door did not match. But then it was already too late and we cut the door to size and installed it by force. We are not proud of this at all and the consideration is actually to get a carpenter to install a new door or to install the old one properly. The room had no electricity and no heating. The electric heating was not operational due to the lack of electricity.

After that, the room was mainly used to store things and furniture that we didn’t need directly. When we brought Henriette home in 2021, our cat Ekat was so scared that she hid in the room and hardly went out. That’s where the name cat room comes from. After weeks of the dog and cat not getting used to each other, we made short work of it and closed the door completely. Ekat, however, got a cat tree in the hallway beforehand so that she could withdraw from the dog, but at the same time have an overview of us and the house.

The first task was to clear the room and the attached chamber. We have already done this in the pictures above. Next, we removed the old electricity cables, the heating and started to uncover the ceiling. Underneath the masonite panels were wooden panels in very good condition.

We also removed all skirting boards, door and window frames. On the one hand, because they were in a very poor condition or were not complete. On the other hand, because we would have liked to have a different style. After the panels were uncovered, it was time to pull out the nails…Then clean up and cover the floor. And then the big painting began.

The pictures show the first layer with panel base colour. It has already covered very well! This was followed by a round of semi-gloss white paint. The next step was to start wallpapering the walls. We chose the “lazy Swedish version” for the room – that is, wallpaper on wallpaper. As the name of the room already gave the crucial clue: Yellow is the theme. The wallpapered walls get a light yellow tone, followed by white panels with a length of 1.20m.

Soft yellow – The colour theme of the room

Felix suggested a soft yellow quite directly. Since we didn’t have a room in that colour yet, I liked the idea a lot too. The soft yellow offers a decisive advantage in the room, as it radiates a wonderful warmth. The room faces west and is very gloomy and rather cold, especially in winter. The yellow will visually brighten it up.

The tiled stove – the big side project

The tiled stove in the room was found by our stove builders to be incorrectly assembled. Since we wanted to install a new stove in the room next door and install two existing stoves in the attic, it made sense to finally restore the tiled stove. We knew that if we didn’t have the stove repaired now, we never would.

So the work of our stove builders began at the beginning of July. The tiled stove was carefully dismantled and the interior restored. It turns out that the entire interior had actually collapsed. Some tiles had been cut together totally crooked. Afterwards, it was rebuilt. Carefully and with small steps.

It took a whole week, but now the oven is up and shining in all its glory. In autumn it can be tried out once everything has dried after 2 months.

After the tiled stove was rebuilt, the stove builders were out of the house (for now) and the yellow paint was on the wall, the next step came: the panels, mouldings and frames.

The tiled stove is still being cleaned and grouted. Then it will be inspected in September and the good piece will be ready for use again at the end of the drying period!

The installation of the panels and skirting boards was – as always – relatively unusual. After much toing and froing, we decided on classic white mouldings and frames. Before that, we had considered painting them light grey (antique grey).

The result of the renovation

Of our plan, we actually only implemented 2/3. We rejected the idea of painting the floor after I had scrubbed it properly once. It’s not perfect and has signs of use, but we think it gives a nice atmosphere and honours the age of the room.

Outlook into the future

We are very satisfied with the result. At the beginning of next year, the room will be connected to the new electricity grid and the heating will be installed. After that, it’s time for the furnishings!

We also very much hope that our summer guests (the closest family, who love to lend a hand!) will help us with the doors and windows.