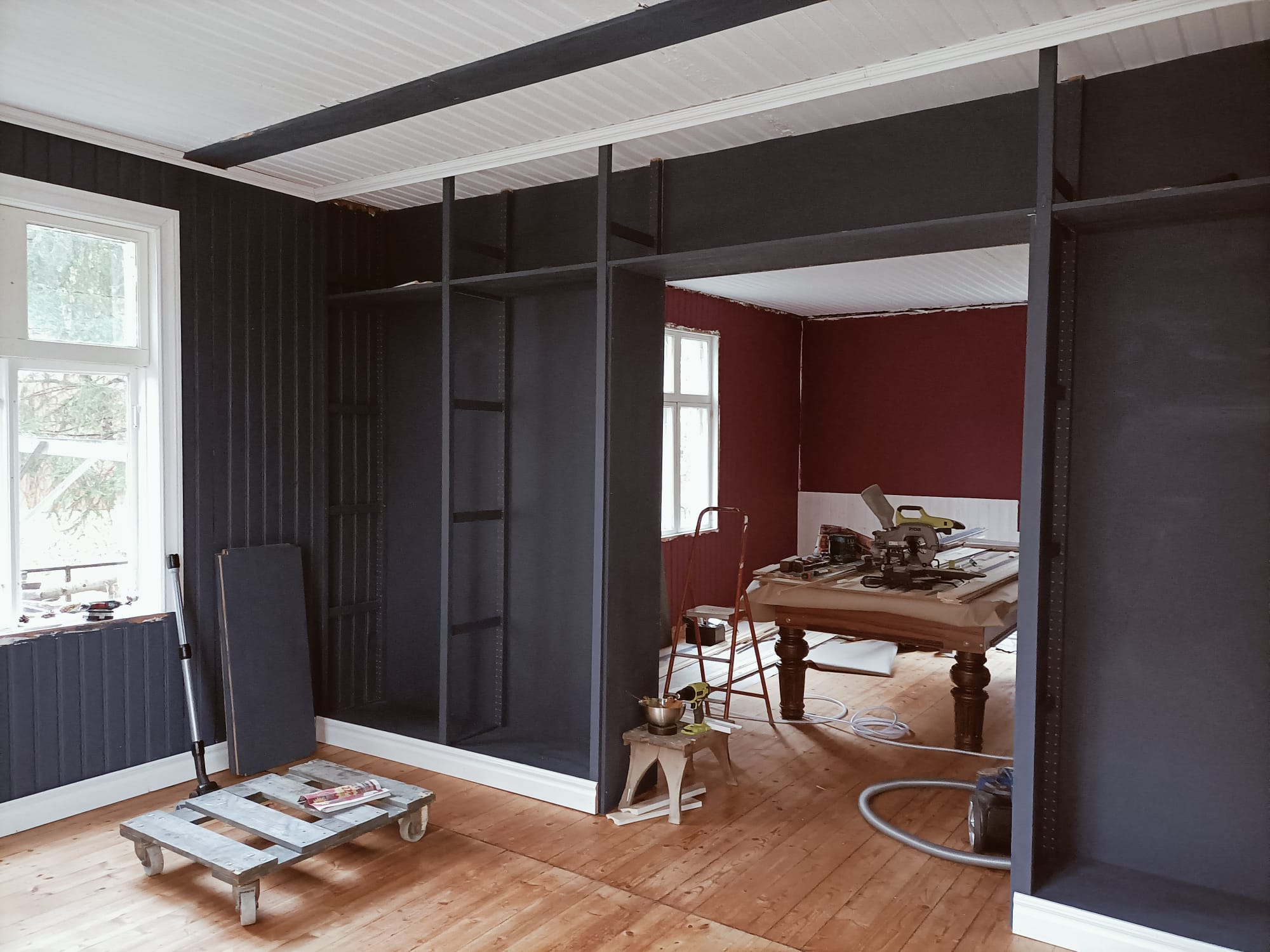 The construction of the bookshelf. A look behind the scenes

Last year, we would never have thought that we would build a bookshelf as a room divider in the living room.

We are both fascinated by the amount of space and the openness of the rooms in our house, which are connected at the same time. Among other things, that was one aspect that made our hearts beat faster when we saw the floor plan in the exposé.

The state and the first ideas

The living room was in reasonably good condition when we bought the house (compared to the other rooms on the ground floor). On the one hand, this was because the previous owner had started a renovation. On the other hand, because the room was quite empty and not really used.

We really liked the big room and thought it was quite chic. The first idea was also to leave the room this big as a whole piece. However, two complications arose:

After getting a quote from our fireplace builder for a relatively modern large fireplace, we were baffled. It definitely didn’t fit into the budget this year. Then we looked for alternatives. One idea was to buy a second-hand stove and have it installed. A tiled stove that would look very good in the room (whether round or square) was easy to buy second-hand. However, it was again too expensive to build. By chance, we discovered a simple, yet beautiful French fireplace for very little money. Unfortunately, the stove was snatched away by someone else.

Afterwards, the final idea followed, which we continue to pursue. We buy a used German/Austrian tiled stove and have it installed here in Sweden. This will not happen in the next 1-3 years, as we first have to find a stove, organise the dismantling and the transport to Sweden. Afterwards, the installation.

So we decided to approach the living room project without a stove for the time being and heat the room with radiators.

2. How and what furniture do we put inside?

Of course, at first the question seems relatively trivial.

But an important aspect is that we don’t have a classic TV, but a beamer. Here we are a bit more flexible, but at the same time it is hard to pick out the best idea when you have so many options. Then there’s the pool table, which takes up an enormous amount of space. At some point in the future, it will be replaced by a grand piano for Felix, but until then, it’s not doing too badly.

It was also difficult to agree on a suitable position for the sofa, as the billiard table should of course not be restricted in terms of space. Furthermore, some chambers are bursting with old books – which drives us closer to the bookshelf.

The development of the bookshelf

So we decided to separate the room to make it easier to furnish and, in particular, not to have to heat the whole room.

The idea of a book wall came up pretty quickly. I really like this kind of cabinet and storage where you can get two functionalities out of one object. I showed Felix the matching ideas and he was just as enthusiastic. Then we started to think about how and with which materials we could build the shelf and, above all, how we could get the right separation.

Felix came up with the idea of building a large passageway with a sliding door. He also wanted a dark red colour in the billiard room.

Our goal was to keep the budget as small as possible and still get a great style. So we thought it would be a good idea to recycle the old Billy bookshelves. They were in desperate need of a paint job, but I had wanted the shelves to be the same colour as the room wall.

In the meantime, some sketches and ideas emerged.

Finally, in mid-summer, I set to work on the old billys and wanted to start sanding and priming. That’s when it struck me what a shitty job it is. Not only would it take time, but it wouldn’t end up looking the way we wanted it to.

That’s when the glorious thought came to me: We have a lot of unpainted pine storage shelves in the shed. We could just take them and cover them up! Finally, we disposed of the billies with a clear conscience and I started on the new shelves.

First we tried out some colours on them – glaze, light blue, dark blue or white? Our elle decoration colour, which we also used to paint the walls, actually looked best. So we decided to paint the bookcase in the same colour as the wall. After two coats of paint, the shelves and racks were ready for assembly.

The basic structure of the bookshelf

On the right we placed a wider shelf (approx.60-80cm) and on the left two narrow ones (40cm).
The two outer shelves were each screwed to the wall. We decided against fixing the shelves to the floor in order not to damage the floor. Instead, we fixed the shelves to the ceiling. In fact, this already gave a good basic structure.

Next came the blinds. For the back, fibreboard was the best choice for us. We painted one side blue and the other red. Here, too, we saved a step. Actually, the back (the red side) was supposed to be wallpapered. However, we are thinking of insulating the wall and putting in a real door. So we chose the easier and faster option for now.

The finish of the bookshelf

After fixing and the final coat of paint, the shelves finally came in and the books.

Since this is a storage shelf and not a pure bookcase, the boards are twice as deep. Which gives us more space by being able to layer books twice.

We cleared out about 7 boxes of books at the weekend and two more are still waiting for us.

The best part, however, is that our projector screen fitted in perfectly at the weekend we watched a film together and finally sat on a comfortable couch for over a year!

There’s not much left to do.
However, there are still some minor tasks to be done.

For one thing, we still have to put up the curtains and find a suitable curtain for the passageway.

The heating and electricity still have to be laid, but that should go relatively quickly, as everything is laid superficially. after that, we still have to fit the lamps.

We also need to find a billiard professional to lay a cloth and level the table for us.

There will be an update soon!