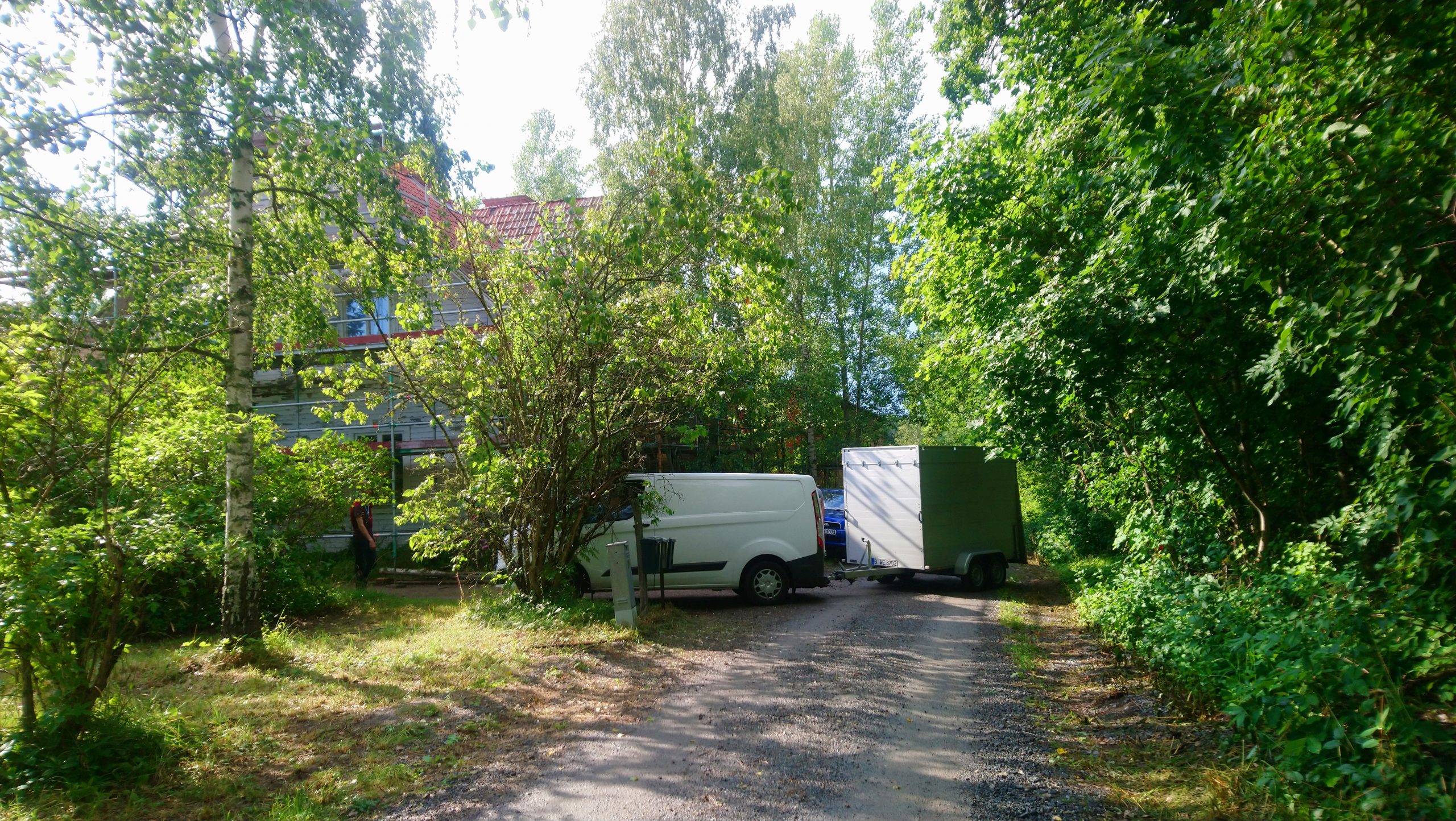 Our unconventional first summer in the swedish countryside – Right exhausting

Summer is coming to the swedish countryside and our garden is slowly starting to bloom!

It is a beautiful time right now. The sun is shining so strongly and it gets really warm in the sun. But you still need a warm jacket when you go outside in the evening.

I am excited to see how this summer will be and I hope that my husband and I will have more time to chill and relax in the sun and swim in the lake.

Last year was quite exhausting and unconventional.
Let me explain…

Moving from Berlin to the swedish countryside

Last year we bought our house in the swedish countryside. In my first blog post, I briefly explain why and how we found our house. If you have any questions about it, feel free to get in touch with me!

We moved to Sweden right after our wedding in June.
We had about two and a half weeks to pack and prepare everything for our move.

Felix younger brother and father helped us with the preparations. We had a car, a smaller transporter/ van and a trailer for the whole move. However, it was not enough! We didn’t have much furniture, but many smaller things. All our plants also had to stay in Berlin. My maid of honour took some of my favourite plants with her (tomatoes, raspberries and currants).

Initally, we were not sure, how we would managed the bureaucracy of our expatriation and if it is even neccessary, as we move within Europe.

However, in mid-July we moved to Sweden.

Even the trip to Sweden had his issues

About one hour before our arrivial in our house, we got a flat tire. The tire of our trailer flew away while driving. It was super scary!

Fortunately my husband managed to drive safely in a parking bay. As the trailer has 2 wheels each side, he was able to switch a wheel. This made us possible to drive to the nearest service station.

Again, we were luckily because we were really close to a larg town (Norrköping) and it was in the afternoon, so everything was open!

In Norrköping we asked at one car repair shop for help and they sended us to a wheel specialist.

While we waited for the tyres to be changed, we could have a coffee and relax a bit. It was already very exhausting and we just wanted to get home. After about two hours we were able to drive the last kilometres home!

The arrival in the village was surprising!

Our house was surrounded by the scaffolding we had ordered. Everything was in full bloom. We also had beautiful roses around the house! Even the grass was mowed, by the neighbours.

But at the same time, it was really hard to get into the house because the scaffolding closed the front and back doors! Therefore, the boys took down some elements of the scaffolding so that we could open the door and bring our things inside.

At this point we were confronted with reality.

We knew beforehand how much work we would have. But at that moment it was so visible that we were briefly overwhelmed.

Having brother-in-law and father-in-law with us and helping us so much was really wonderful. It gave us so much time and we could only start or even finish some renovation tasks so quickly because we had that support!

University & Business from the swedish countryside

This time was also filled with many exams, final papers and work.

My husband only had two weeks’ leave and wanted to do as much as possible in that time. From my point of view, he got so much done! I don’t even know where to start. He was everywhere and even enthusiastically helped with the plumbing!

After that, he worked very long hours and spent every free minute trying to renovate something. Later he even builded the last parts of the roof.

On my side was an exam that I could take online. That was so great because I saved so much travel time! I also had to write two final papers. Also, my work continues from the home office in the swedish countryside.

It was a tough time because we had to deal with many different issues at the same time. Looking back on it now, we have no idea how we did it! It was crazy.

And not to forget: We still don’t have fiber internet here at our property….

We are both happy that we did all this in 2020. Not only that we learned a lot of new things. At the same time, I can’t imagine how you manage when you’re older, have two full-time employees or even a family.

And yes of course – you can also do less.
But that’s not our style.

Total renovation of our house

Our beautiful house is located in the swedish countryside – 100km from Stockholm. The region of Södermanland is bordered by the Baltic Sea to the east and Hjälmaren to the west. Within the region are not only many smaller lakes, but also numerous castles.

In recent months we have found that the region is very popular with city residents (Stockholmers) and many own a holiday home in Södermanland. In the past, the region was also very wealthy, which you can see from the castles.

The King has a residence in Flen – Stenhammer Castle. In 2020, he and his wife spent almost the entire year there due to the pandemic.

However, our house was neglected the moment we bought it.

Nothing was done inside or outside for over 20 years. Trees damaged the roof and birds lived in the façade. There was only electric heating, the chimneys were homes for the birds. It was not possible to see at the end of the property as the grass was so high! Inside there was dust from over 20 years, a lot of stuff and dirt.

As we bought the house with everything included – so with lots of nice old furniture, the dirt and rubbish was there too. It took us a lot of time and more than 5 containers to get rid of some stuff….

But last summer we managed to sort everything inside. Now only the barn needs this task.

Roof, facade, kitchen, bathroom and so on

During the installation of a new heating system, we did the bathroom and the kitchen.

At the same time, it was necessary to renew the electrical installation in the house. Especially because a fuse box had previously been placed in a door – namely in the door to the bathroom.

In the end we’ve done pretty much everything

Nevertheless, we still found time to go swimming at the lake. Only 3-4 times for the whole summer, but better than nothing.

I remember the last time we went to our little island with our SUP and paddle and had a cold beer and chilled in the forest. Afterwards we jumped off the SUP into the water like kids and even tried to teach it our dog Henry. The water was so warm that I didn’t even want to get out!

Shortly after this last outing, autumn sent a few greetings and summer was over.

Hopefully this summer will include more of this fun experience.

We found out that there is a path to our nearest town and a castle that you can go by boat. We want to try that out!

But slowly we are starting to create our summer experience – last weekend we had a romantic picnic at the castle.

We cycled to the castle through fields and horse farms to the lake. It was great to relax and enjoy nature and time.

Have you had similar experiences with your move/house building/ renovation? I would love to hear them!