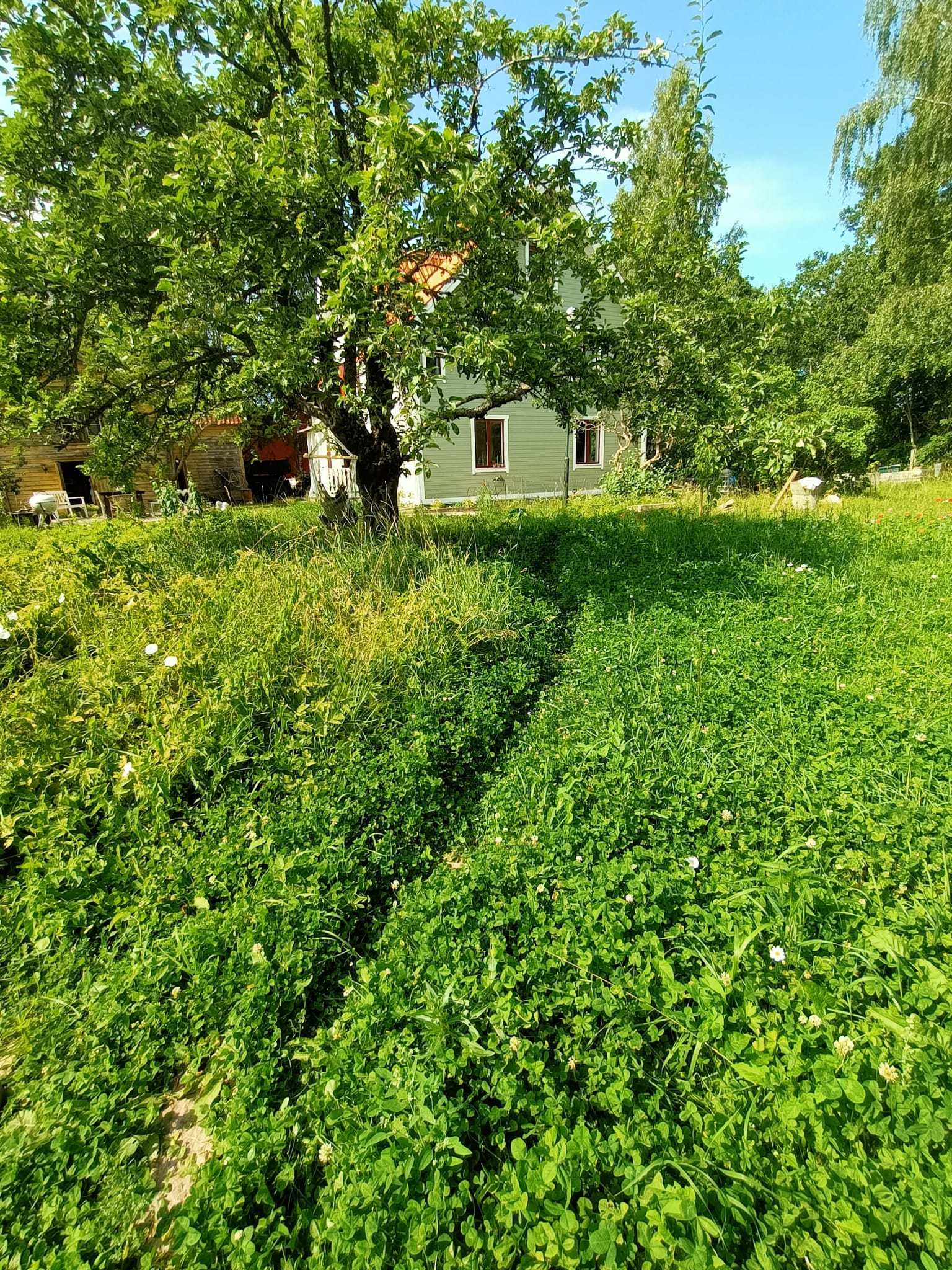 Summer is in full swing here in Sweden. Uninterrupted sunshine and warm temperatures. Within a short time all the plants have shot up and are growing and growing. I remember too well making plans at the beginning of the year when everything was still grey. What do we plant? Where do we plant it? What style do we want? In my post from February “Gardening Goals for this year..”, I tried to summarise our needs and wishes.

This gardening season has been a great opportunity for me to really try gardening. I knew it roughly from home, but it wasn’t fun because my father did most of the work and was always very eager to do everything the way he would do it. You couldn’t try and test anything on your own. It was always a hassle to help out in the garden, especially as a teenager, when you wanted to prove something.

And only now have I found out how relaxing gardening is. It’s a lot of pleasure to watch the plants grow and to support them in the process. And even more so to then prepare and eat your own vegetables deliciously.

In fact, we managed to plant 2 bushes of black currants and 2 red currants. Also, two rhubarb survived! Finally… it took me a total of five tries. And I still don’t understand what exactly the problem was with the other rhubarb plants that didn’t make it and died. We also planted a blackberry (thornless!). We are curious to see how it will develop.

I can also proudly tell you about our herb beds. The sage feels good, as do the thyme, rosemary, dill and mint. Another great achievement was the fresh basil. We have made our own pesto several times now and it was simply delicious! So far we have four lavender bushes. Two of them imported from Germany. These have become huge! And two more from a garden shop here in Sweden.

Our vegetable beds also developed in a very exciting way. We planted a huge potato bed, but out of a total of 5 planted rows, only 2.5 came up! However, this may be due to the fact that the flooding did not benefit the tubers. At the beginning/middle of May there was a very heavy rain for two days and everything was under water. Our entire garden was a pond! Well, let’s see how many potatoes we can harvest soon…

At the moment, however, I’m not quite convinced about the potatoes, as they take up a lot of space. However, the gardening maintenance effort is not really decisive so far. Next time, however, I would definitely like to plant old varieties and try them out. There is a large selection of potato varieties in a privately run garden shop in Nyköping. Therefore I would like to plant two rows of early potatoes at the beginning of autumn. So that they can be harvested in early spring.

I got a total of 9 plants at the beginning of the summer. Among them were early varieties (Rumba, Loron, Honeyoye) and also varieties with a long harvest (Tristian, Polka). As well as late varieties (Florence).

Tristian and Polka totally convinced me personally with their taste and the size of the berries. We have already been able to grow 5 new plants on them, which are now also looking for a place in the bed. More sprouts are also developing.

My harvest was not enough for jam, also because it came late. But it was perfect for a snack.

I now have a total of 18 tomato plants in the beds (and pots). Three (maybe it was four…) different varieties. The tomatoes are growing very well and the first fruits are now hanging and ripening. The preserving ideas are already lined up: Tomato chutney, salsa, tomato sauce and maybe some pickled tomatoes. We are also looking forward to a fresh tomato soup and a tomato salad!

My tomatoes are all outside without a tomato house or other cover. At the end of May I was so motivated and influenced by all the gardening forums that it is essential to cover your tomatoes. We also tried a tomato house, which fell down after less than 10 hours. And we didn’t really want to build something permanent. Anyway, the tomatoes are doing fine, even though they are standing freely in the bed without a roof.

At the beginning of sowing, my butternuts were growing like crazy. However, after planting, one of the two plants drowned when there was a heavy deluge of rain. The Hokkaidos didn’t want to come at all and then they all came. So now we have 6 Hokkaidos and then another 3 Butternuts. It turned out to be a bit much, because the plants (especially the Hokkaidos!) were bitchy at the beginning. Well, you can store the pumpkins well.

My first pre-picked cucumber unfortunately drowned, so we sowed two more later, but they were also a long time coming. So I bought an already pre-pulled plant in the garden shop. A so-called Västerås cucumber. I think I’ll pickle that one too. And as expected, my two sown cucumber plants did come up!

As you can see, I am quite impatient and gardening was a real challenge, especially in the beginning.
However, I think I’m getting used to it and will be able to plan and assess things better next year.

We have two zucchinis plants and soon the first fruits will come. It’s the yellow variety, by the way! I’m sure it will taste great on the grill.

Next we have the lettuce, this has also been harvested several times and the heads for late summer/autumn are also ready and growing diligently. I have also sown radishes and rocket a few times now, because it is so simple! Home-grown rocket on a pizza with serrano is really a hit. Highly recommended!

Maybe I’ve forgotten one or two vegetables now… but we should slowly come to the end, as there is still much else to be told!

I haven’t had much luck with fennel either, but I think it’s finally coming! How the size and taste will be is a big question mark, but let’s see. The (red) cabbage is growing well. Unfortunately, the white cabbage has been a bit reluctant, next year I will put more emphasis on it. My carrots are also growing, I only planted them in June and plan to plant a few more to harvest later in autumn/winter.

My home-grown aubergine doesn’t really want to. It hasn’t developed at all in the last few weeks. Maybe it was too cold for her at the beginning or I didn’t give her enough compost. Fortunately, the aubergine I bought is in full swing and the first flowers were now on it.

After much deliberation about what the barbecue area should look like – flagstones, bricks or gravel, we decided on a wooden deck. Felix has built the terrace wonderfully! Here you can read again how he did it:

We then built a garden table together. For this we took wooden boards and treated them with a glaze, and screwed them together with battens. The table legs are recycled. Before, they were the poles of the old porch.

I also planted peonies at the front of the patio last month and hope they will flower next year too. The pergola will come in time. First the shed has to be restored, because we want to connect the pergola to it. We also already know which climbing plants to choose: Climbing roses!

If you are wondering why so much space has been left on the right-hand side of the terrace: We would like to place a bath tub at the corner. This would be an ideal combination: The sauna is on the ground floor of the shed and the bath tub is directly in front of it.

Future projects are queuing up with us! And it’s a lot of fun to slowly change the property.

The shed: Next year project

First of all, some very interesting news: The shed was and is not actually a shed!

The building was built as an outhouse and of course also had rooms that were meant for storage, but not exclusively. We only recently discovered an outhouse in good condition. Furthermore, an old lady who lived in the house for a few years as a little girl visited us this month! Her parents bought it in 1944 and ran it as a summer boarding house, but they sold it again around 1960. She told us that there were 5 “flats” in the main house, each with a room and a kitchen. In the “shed” lived her family and among others also staff.

This visit was the gamechanger for us.

We decided not to demolish the upper floor and to build a holiday flat there instead. Since we don’t want to insulate the house, then of course a pure summer flat. In addition, we had the great idea that we could install a sauna on the ground floor in the room on the east side. The chimney for this can then be used for a kitchen above! Above all, the location of the sauna would be perfect! Close to the house, the future bathing barrel and close to the wood store (short distances!).

Back to the holiday home: We could build 2 real bedrooms, a bathroom and 2-3 “extra” sleeping possibilities. We haven’t planned anything else so far, because this year we won’t be doing anything big to the shed! If we find the time and motivation, we will eventually clear out the shed and create more space. In August/September, however, we will fill up the wood stock again, so we will be running out of time anyway.

But next year we would like to see the first progress in the shed, whether we will also manage to repair the roof I don’t know. Definitely we need to get in touch with our neighbours’ roofer, as we have seen this year what a good job he does. Also we will dispose of the old tiles and do the preparatory work ourselves, I can already foresee that.

Moreover, we would like to leave the facade as it is, except in a few places. Only badly damaged areas will be replaced. Otherwise, it will be a case of scratching and painting. Here we want to go for the classic Swedish red. The red colour has the additional property that you don’t have to prime the wood beforehand. the windows will be white and the doors probably the same green as the main house. But maybe we’ll change our minds about that.